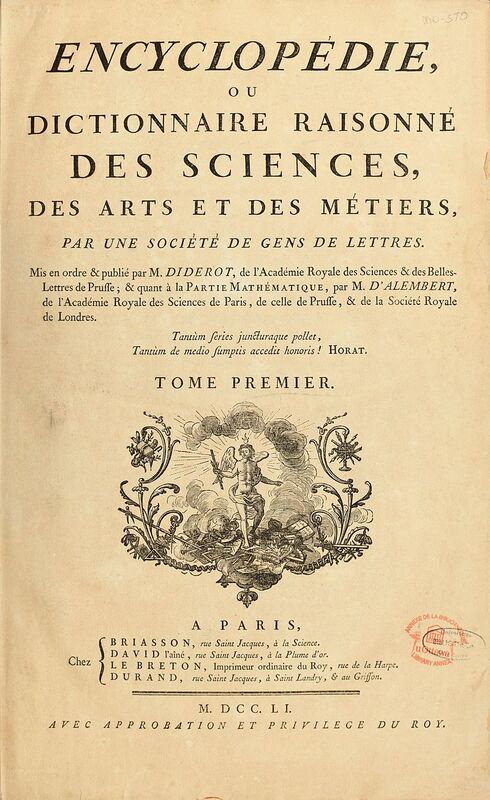 The cover of Diderot's Encyclopedia. An ambitious Enlightenment-era project to compile a mass of information into several encyclopedias, the work can be used to identify how ideas have endured throughout history (especially in terms of perceptions regarding these ideas).

Focused heavily on the individual’s soul and its enrichment (see item “Plato” in “Political Philosophy of Classical Antiquity” for more information on Platonism), Neo-Platonism was the reapplication of Platonic ideals towards Christianity. Despite Plato’s pagan religion, scholars such as Marsilio Ficino proposed Christians approach humanistic/Christian improvement through the balance of the soul advocated by Plato. Ficino highlighted similarities between Platonism and Christianity in his attempt to unite the two—for example, both are characterized by restraint concerning the vices and the perseverance of the soul beyond life. Furthermore, both featured an otherworldly focus as means of transcendence. Plato emphasized the pursuit of the abstract form of good, while Christianity encourages a focus on God. An earlier philosopher, Plotinus, even went as far as to merge the two, recognizing God and the form of good as synonymous. Diderot’s entry of Platonism lauds Plato and the contributions his philosophy have to Christianity, painting the two as complimentary (albeit Christianity being central and Platonism an ornament).
This approach regarding Neo-Platonism in Diderot’s Encyclopedia was also a result of the Protestant Reformation (discussed in week three of HIST 139). Christianity had already become deeply intertwined with the ideas of Plato and Aristotle, with Thomas Aquinas adopting a number of their proposals regarding the soul in his commentaries on the work of Aristotle. Additionally, Aquinas interpreted Plato to be in support of the conception of the holy trinity (Aquinas Institute), a position that Diderot and Martin Luther echo. During the Reformation, though a considerable amount of previous doctrine was condemned by Luther, many aspects of Platonism nonetheless endured in Luther’s theories. Luther’s concern with aesthetics and music as means of coming closer to God (Mattes) resonate with Plato’s position on the higher nature of the arts. Furthermore, he tends to view the Bible through an allegorical perspective, once again echoing Plato’s allegories.