Foundations of Monarchical Theory: Changes and Continuities from Plato's The Republic 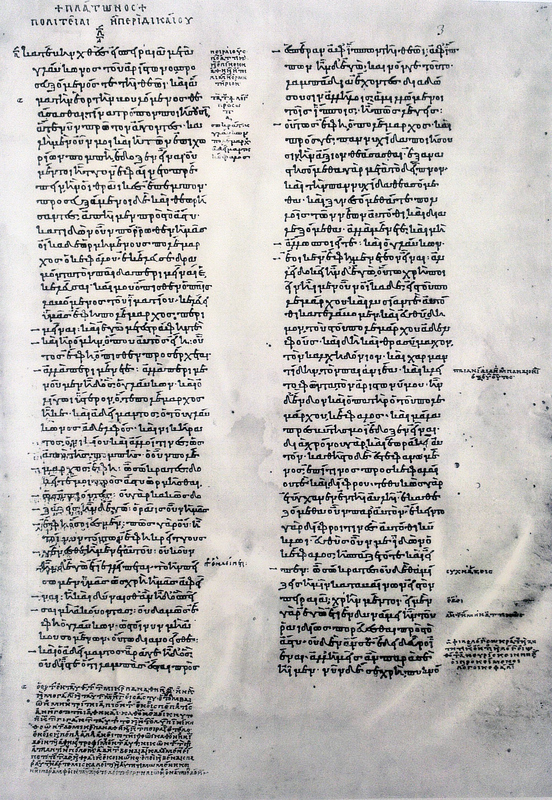 A page from the oldest manuscript of The Republic, located in the National Library in Paris, France.

Monarchy being the common form of government in Early Modern Europe, the relevance of Plato’s The Republic can be found in his advocacy for monarchy. During his lifetime, Plato believed that it was the bad judgement of the Athenians (realized by democracy) that led to his master Socrates’ execution and the beginning and prolongation of the Peloponnesian War. As such, he claims that while a democracy is undisciplined and lacks effective direction (especially since he saw most people as easily swayed and intellectually inferior), a monarchy with a virtuous and enlightened leader is the ideal form of government (Book VIII). He calls this an "aristocracy." This government would be just, allowing each member to live out a virtuous life in the way uniquely designed for them and for the productivity of society (Book IV).

The Early Modern Period lies witness to the preservation and reconceptualization of Plato’s propositions in the Republic, one notable example being that of Machiavelli’s The Prince (see Princeps in the collection “Political Developments and Diffusion in Early Modern Italy”). Written to outline the behavior of an effective monarch, Machiavelli’s The Prince indirectly extends certain concepts put forth by Plato whilst reevaluating and sometimes rejecting others. In Book VI of The Republic, Plato calls for rulership by a virtuous and learned individual he calls a philosopher-king. Good virtue, according to Plato, translates to good judgement. Chapter 9 and 14-19 in particular of The Prince (in addition to most of the text) echo Plato’s sentiments regarding the importance of a learned individual as ruler. However, while Plato’s portrait of the philosopher king was lacking much in terms of political and practical knowledge (focusing on virtue), Machiavelli strengthens Plato’s arguments in these areas. Diplomacy and warfare, he argues, are practices that are necessary to the thriving of a state and require an educated monarch to be effectively conducted. Without an educated leader who rises through this merit (the opposite being the short-lived ruler who rises through circumstance), Machiavelli anticipates the decline of the state and its people (Chapters 6-8). On a larger scale, their call for an educated leader can later be seen in the robust education undergone by the monarchs of Early Modern Europe. Queen Isabella of Spain was celebrated for her learned background (Cowans). Cosimo de Medici sponsored the reestablishing of Plato’s Academy in Florence, embodying his firm belief in the importance of education (Durant).

That being said, one area of contention between the two is found in the importance of virtue in the monarch. For Plato, the role of virtue is uncontestable—without virtue, the ruler will not make good judgements. Machiavelli, however, posits the distinction between virtue and practical skill/intelligence. In chapters 8, 15, and 17 of The Prince, Machiavelli states that virtue can be temporarily abandoned in the quest for power so long as the consequences are sufficiently mitigated by proper management. Machiavelli’s virtue is secondary to the effectiveness of the leader and the well-being of the overall people, meaning that publicly imperceptible transgressions of virtue are generally acceptable (and even encouraged). Furthermore, while Plato paints fear largely as the tool of the tyrant (a bad system as seen in Books VIII and XI of The Republic), Machiavelli acknowledges that constant fear—when controlled and not in excess—is extremely beneficial to maintain rulership (Chapter 17 of The Prince).