Within the exhibit, the origins of Early Modern European political philosophy are analyzed through the works of several Classical philosophers. This page provides an overview of each. 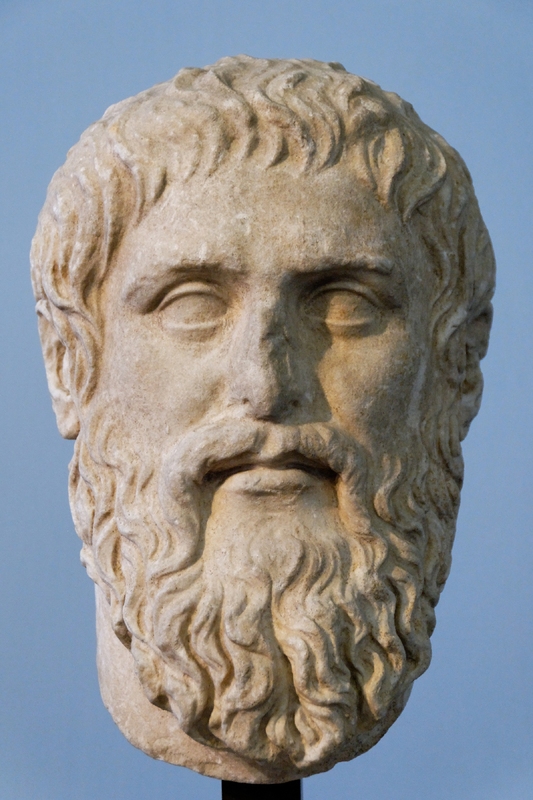 A copy of Silanion's Bust of Plato.

Regarded as one of the greatest thinkers of Classical Greece, the study of Plato and his works was prevalent throughout the Renaissance (one example can be seen in "The School of Athens," an item found in the collection "Political Developments and Diffusion in Early Modern Italy"). Unlike our perceptions regarding philosophers in the modern age, the philosophy of classical antiquity and the Renaissance also extended to science, mathematics, and more.

Not much is known about Plato's early life. Later in life, however, he gained acclaim as a student of the philosopher Socrates. As Socrates did not write anything down himself, much of what history knows about him come from Plato's writings about him. Plato frequently wrote in the form of a dialogue, or a conversation, with Socrates as the protagonist. In these dialogues, one or more philosophical concepts would be explained or hinted at using a series of questions asked by Socrates to another person (though many do not arrive at concrete conclusions).
Following Socrates' execution in 399 BCE (which would later give Plato a disdain for the judgement of the masses as it was democratically-decided), Plato opened a school of philosophy called the Academy. This would provide the basis for later educational institutions.
During Plato's life, he would take on several students of his own, the most notable being Aristotle.
It is unknown how Plato died, as there are many accounts (Meinwald).

Philosophy
Plato introduces his own concept of morality, starting with virtue theory. Justice is one of them, along with temperance, prudence/wisdom, and courage. Justice to Plato is a type of harmonious living in which each person does their own role within society without infringing on others (specialization). On a personal level, it is a harmony of the soul based on intellectual pursuits and the exercise of temperance. Temperance is the restraint of vices. Prudence is the application of reason for good judgement. Courage is approaching problems without unnecessary fear (not cowardice but not foolhardiness either). Plato then proceeds to explain his theory of forms. In short, everything has an ideal form. Take a chair. According to Plato, there is an ideal chair; all chairs that exist on Earth share some qualities that make them chairs. The ideal chair is the embodiment of these qualities, the embodiment of the concept of "chair." Likewise, the greatest form is the form of good. To understand what is good and what good is, the philosopher must study it (The Republic, Book IV).
The rebirth of these ideals, occurring prior to and in the Renaissance, manifested into the school of thought known as Platonism/Neo-Platonism (see item “‘Platonism’ from Diderot’s Encyclopedia” in “Political Philosophy of Classical Antiquity). Having been popularized by Petrarch during the Renaissance, the Platonic philosophy helped bridge the gap between two ideologically disparate time periods—pre- and post-Reformation (as discussed in week two of HIST 139). Despite his harsh condemnation of the Catholic Church, Martin Luther still retained Platonic values such as a focus on the soul and aesthetics (Mattes). 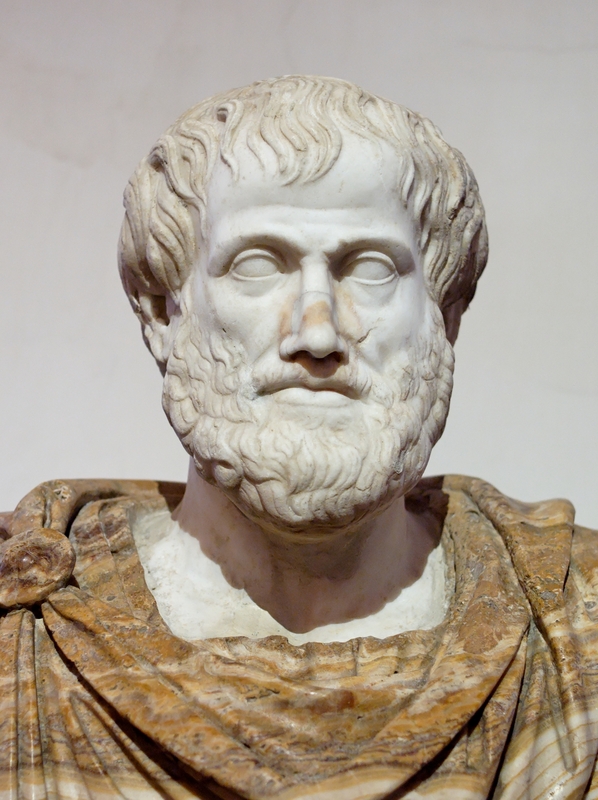 A copy of Lysippos' Bust of Aristotle.

The student of Plato, Aristotle was another prominent philosopher of Ancient Greece. His works were also studied in the Renaissance, and many of his theories thus made their way into European intellectual history.

As with Plato, not much is known about Aristotle's early life except that he attended Plato's Academy. After leaving the Academy following Plato's death, he served as tutor to Alexander the Great. Throughout his life, he produced many writings and taught at his own school, covering a wide range of subjects such as ethics, physics, biology, and more (Kennedy, p. 1-7).

At the root of Renaissance notions of humanism and self-actualization was Aristotle (discussed week one of HIST 139). Aristotle believed that each person had a unique potential. To live the best life possible, one must fulfill their potential, and the best political constitution should allow for this. Just as the sapling yearns to grow into a robust tree, so too should we pursue our own growth. One manifestation of Aristotle’s self-actualization was Alberti’s concept of the “Renaissance Man,” or one who trained themselves intellectually, spiritually, artistically, and physically. Men would study classical texts and discuss them to develop their mental abilities, devote themselves to pious living to develop spiritually, pursue the arts to develop artistically, and practice swordplay and acrobatics to develop their physical abilities. Seen as the ideal depiction of a male, the universal improvement characteristic of the Renaissance Man embodied a valuing of self-actualization (Encyclopedia Britannica). 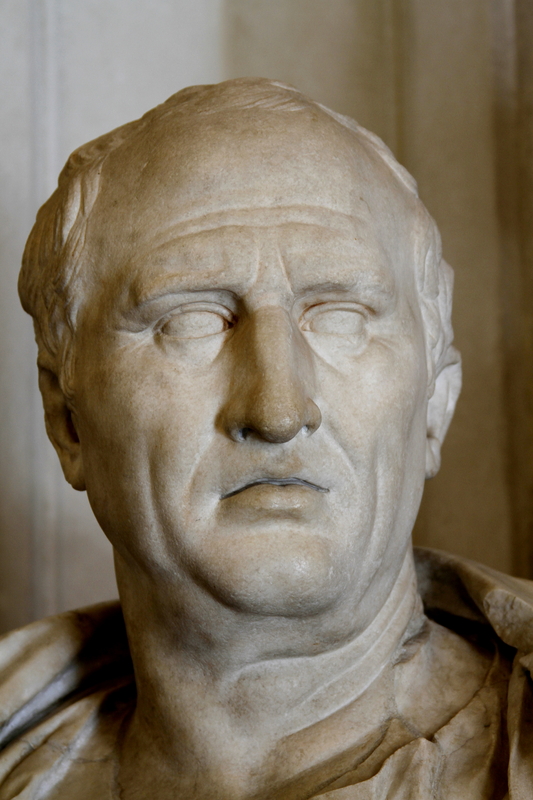 A bust of Cicero.

A famed Roman statesman and philosopher, Marcus Tullius Cicero (106-43 BCE) was known for both his contributions to politics via the Roman senate and his works on ethics, political philosophy, and rhetoric.

Cicero was born into wealth and thus received a thorough education in Greece and Rome, and immediately embarked into the political life. His talent for oration quickly ensured his meteoric rise to the rank of praetor and then senator, delivering speeches both deliberative and judicial. He continued to participate in politics to various extents (largely due to a strained relationship with Julius Caesar and Mark Antony) until his murder (Balsdon and Ferguson).

In terms of his philosophy, Cicero was an avid scholar of Plato, Socrates, and Aristotle. Their influence can be observed in his conception of ethics, Cicero having borrowed the foundations for his virtue theory from the three. In Cicero’s work De Officiis, his model of virtue is similar to that of Plato’s—consisting of justice, prudence/wisdom, temperance, and courage (Cicero, Book I) (Plato, Book IV). Likewise, Cicero shared the belief that a virtuous life was a prerequisite to a truly happy one. However, Cicero disagreed on the case of rhetoric. Rejecting Plato’s assertion that all rhetoric was mere pandering independent from knowledge of the relevant subject (Gorgias 453b-465e), Cicero declared that rhetoric was an intricate art requiring expertise in the topic. Furthermore, much like Aristotle, Cicero believed that rhetoric was necessary for the progression of society. While Plato portrayed rhetoric as inherently evil, Cicero presented the opposite, culminating in his representation of the “ideal orator” (De Oratore, Book I). The works of Cicero, along with Plato and Aristotle, composed a significant portion of Petrarch’s revival of classical literature.