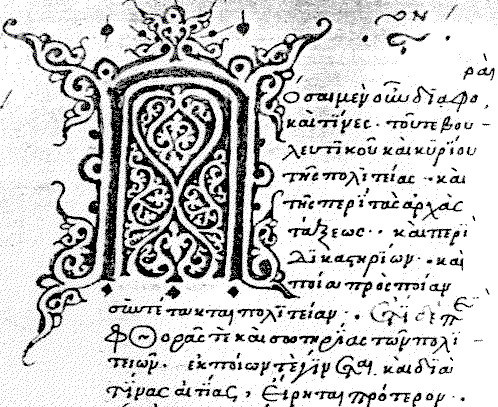 A Greek manuscript of Politics from the fifteenth century.

Like Plato’s The Republic, Aristotle’s Politics outlines a number of different political constitutions. He proposes the existence of six types of government, three good (monarchy, aristocracy, and polity) and three bad (tyranny, oligarchy, and democracy). Each good constitution has a bad counterpart. During his comparison of polity and democracy (two types of government where the many rule), the difference he points out lays the foundation for future English government—a set of sovereign laws. Sovereign laws are rules that no one is above (a concept later called “rule of law”) and tend not to change unless necessary (Aristotle says that sovereign laws should ideally not change to anchor people to morality, but accepts that sometimes it is warranted).

Unlike The Republic, Aristotle does not believe monarchy (called “aristocracy” by Plato) to be the best system, as he states it is not realistically achievable. To find a ruler that exceptional, he believes, is impossible. Similarly, finding a virtuous elite as with aristocracy is difficult. Should one manage it, this superhuman will likely not want to manage a city of lesser beings, nor would they perhaps be bound by our sense of morality. Also, confining rulership to one or few people makes corruption likely (since no one can do anything if the ruler(s) becomes corrupt), and the chances of a larger group making poor judgement is less. Instead, he says polity (rule of the middle class, as they do not oppress the poor as the rich do or resent the rich as the poor do) is the best achievable one (Aristotle, Book II).