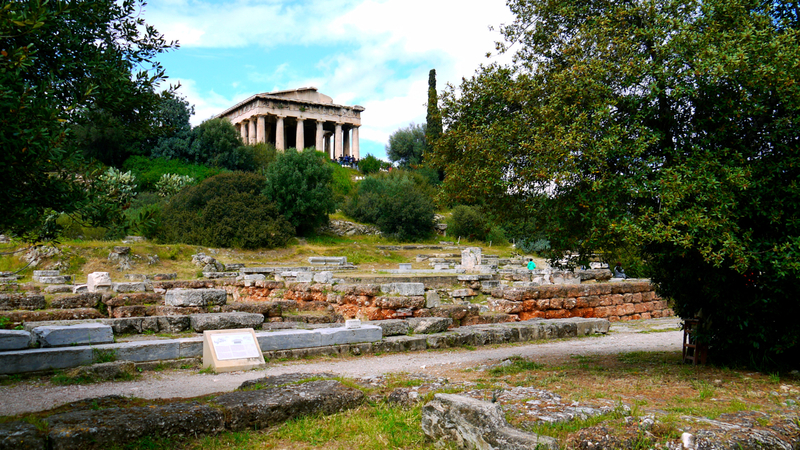 A picture of what remains of the Athenian Agora.

The Agora was a public space found in Ancient Greek city-states (depicted above is the Athenian Agora) in which citizens would congregate for a number of purposes—exchange of goods, speeches, discussion, and more. The Agora itself was usually home to vendors and their stalls.

It is through the Agora that one can understand the deeply involved nature of Greek political and philosophical life, and thus their pride in democracy. Citizens would discuss recent political events and debate one another, influencing their decision on issues. Socrates himself occasionally took to questioning marketgoers during his philosophical musings, as did the philosopher Diogenes of Sinope (Mark). At the core of the decision-making of Athenian democracy was the discussion occurring in the Agora. Aristotle wrote in Book I of Politics that humans are political animals, pointing to an inherent desire to participate and engage politically—a desire that becomes apparent in the Greek Agora. The Agora was the embodiment of the process behind politics, and its intersection with daily life.

Over one thousand years later, the spirit of the Agora—the significance of public discourse—is fervently defended by Enlightenment philosopher Immanuel Kant in his essay “What is Enlightenment?” (the Enlightenment being discussed week nine of HIST 139). Kant details two uses of reason—public and private. Private reason is that which is conducted while in office, whereas public reason is that which is not conducted while in office and done so in an appropriate setting (Kant states that this is exercised to a learned audience). He observes that an effective government is contingent on the proper management of each. Private reason, to Kant, should be limited by the government. He provides the example of the law enforcement officer constantly questioning and disobeying their superior—should everyone exercise their reason unnecessarily during their office instead of doing their jobs, societal productivity would halt. Instead, he points to the appropriateness of setting here and declares that public reason be used. Instead of complaining to and disobeying their superior while at work, Kant suggests the officer publish an article in a newspaper about his opinion or discuss it with others while off work at a gathering. In this way, the officer can promote healthy discourse that may evoke change for those whose responsibility it is to enact it. The Agora was the embodiment of the Athenians’ use of public reason, the tool with which Kant frames the progression of ideas and thus humanity.