The cover of Machiavelli's The Prince

Italian Monarchy through Machiavelli's The Prince

Italian politics throughout the early modern period are a complex matter with city states constantly trying to gain more prestige and power. Throughout this constant power struggle, princes were adapting various political ideas to create a more efficient state. Many of these princes and other leaders throughout Europe would rely on the teachings of Niccolo Machiavelli, a political revolutionary during the late 13th and early 14th centuries. His ideas would play a vital role in the foundation of political thought concerning the security of states.

Both of these items, The Prince and The Florentine Histories provide valuable insight into the political ideas of Machiavelli and how they would eventually shape most of Europe. The Prince’s contributed significantly to political thought where various nobles such as Cesare Borigia, a powerful Italian prince, who helped set a precedence for Machiavelli’s political theory, by using “his own ruthlessness to build up a state in central Italy” (Wiesner Hanks 137). Other leaders such as Louis the XIV committed themselves to Machiavellian philosophy and use their power to encourage fear among the general populace and nobles. Machiavelli specifically mentions Ferdinand of Spain and uses him as an ideal image of a ruler, because he is able to maintain a strong political presence that helps stability to Spain (Machiavelli 132). This idea of a strong prince or authoritarian figure leading the state would persist throughout the early modern period and into the modern era. The Florentine Histories helped set about the beginning of modern historical documentation with his “devotion to facts” (Harvey Mansfield). Through these writings, Machiavelli established himself as a prominent political theoretician, but it was also an effort to try to stabilize the chaos of Italy and to regain favor with the Medici’s.

Machiavelli’s political ideas connect to the much broader extent of the Renaissance and the trend of important philosophical thoughts.  Machiavelli political message supported the idea that states could be independent of the Vatican could use and state, which resulted in European states gaining more power, while diminishing the churches influence. Machiavelli did however still support the church and its mission for spreading Christianity, he viewed it more as more of a Princes responsibility to focus on. 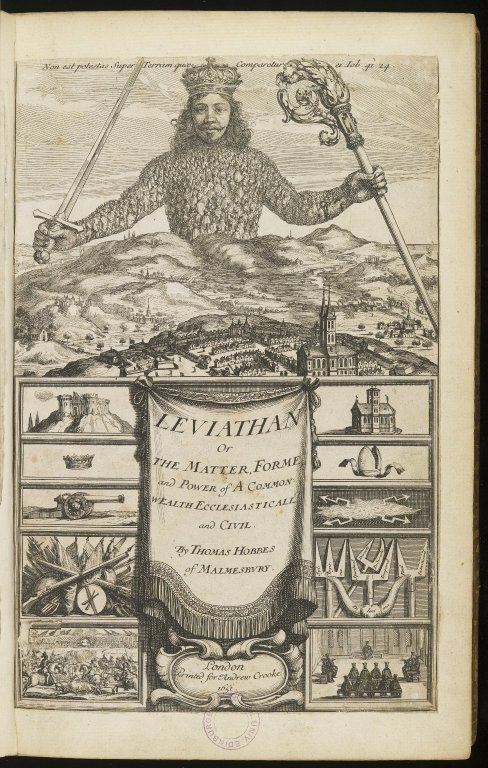 The Cover of Thomas Hobbes's Leviathan

In Thomas Hobbes’s Leviathan, the influence of Italian political ideas is clearly evident throughout the book. Hobbes’s specifically parallels Machiavelli’s focus on the unity and security of a state in the Prince. This idea of state unity is very important in a political sense, because with stability a state is able to flourish and improve the life of its citizens. Hobbes was writing Leviathan during the Glorious Revolution (1688-1689), which was an especially brutal civil war. With the unending chaos, Hobbes was obligate discuss the impact state stability in a political mindset and Machiavelli circumstance and writings shared similarities to Hobbes’s own situation (ONBAŞI 31). In addition, Machiavelli's influence on Hobbes’s stance on the stability of a state, he was also significant in developing Hobbes concern of a public political morality, rather than a private morality. Hobbes then transforms this idea about public political morality, by stating it is riddled by the instinct of human preservation (ONBAŞI 33). This lack of trust of the individual is a key component of Hobbes idea of contract between the residents of a state and the supreme authority (Wiesner Hanks 280).

These political ideas revolutionized political thought across Europe and led to more political discourse about the relationship of the citizens with the ruler, which would prompt others to question political theories. These ideas were especially, because of the political legacy they left behind. Monarchs began initiating reforms such as religious freedom to varying degrees throughout Europe, such as France’s temporary tolerance of Protestants, which wasn’t very effective. In addition to this, monarchs began reforming laws and giving people more freedoms, and evening claiming to tax themselves. Through these political reforms, it clear that Hobbes’s political ideas, were influenced by Italian political thought.