By the mid-17th century, the economic and artistic climates in the Netherlands had developed in significant ways. Social mobility increased in growing urban regions which prospered from growing trade and industry (see the page on Maritime Trade). The style of art and economic realities surrounding painting had begun to change from the standards of the Renaissance. In the Netherlands, artists such as Rembrandt innovated in style, while also relying on middle-class art enthusiasts and patrons to survive. 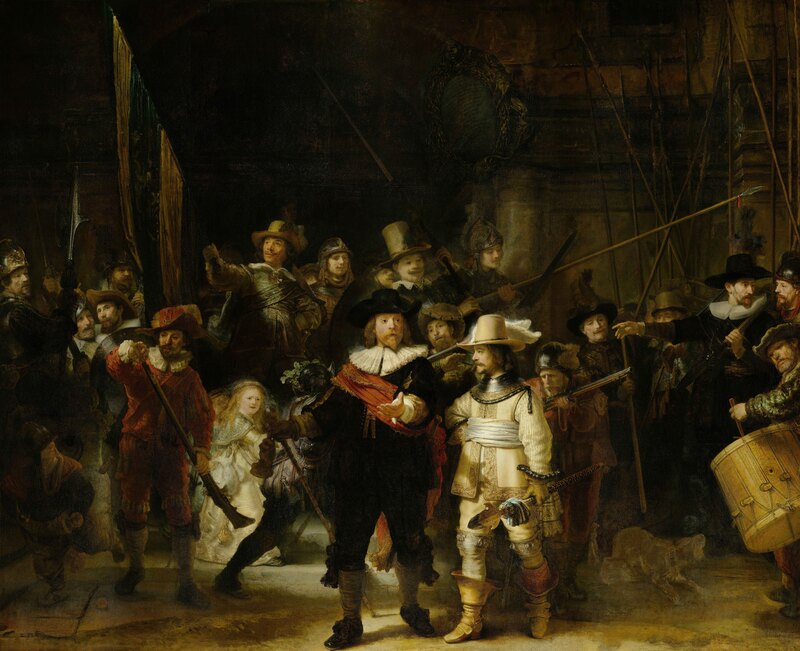 The Company of Frans Banning Cocq and Wilem van Ruytenburgh, also known as "The Night Watch," by Rembrandt van Rijn (1642).

This painting by Rembrandt highlights the emerging class of city elites in the Netherlands during the early modern period, and the social mobility which characterized the economic environment of the Netherlands at this time. The main subject of the painting, Frans Banning Cocq, participated in the city council of Amsterdam and eventually became the burgomaster of the city. This prestigious career had humble beginnings, however, as Cocq was the son of an immigrant from Northern Germany and was allegedly impoverished in the early years of his stay in Amsterdam (Haley 56). This rise to power demonstrates the degree to which the citizens of Amsterdam and migrants from abroad could move up in social and economic status within the Dutch Republic. Through economic successes or from strategic marriages into the existing urban circles of the time, one could become a member of powerful institutional structures in Amsterdam (Haley 53).

Rembrandt painted portraits of many members of this prominent class, some of whom had also risen up the social ladder of Amsterdam society. Elias Trip, for example, migrated to Amsterdam from Germany and became a prominent arms dealer and investor in the Dutch East India Company (Haley 56). In this way, Rembrandt’s artistic world differed from the Renaissance. While Rembrandt sometimes painted for the stadtholder of the Dutch Republic (Israel 1995, 561), the large number of urban elites also commissioned individual works from the Dutch master. Alongside urban and political patrons, Rembrandt utilized the growing number of art dealers to sell his paintings which were not commissioned (Wiesner-Hanks 396).

Rembrandt’s artistic innovations include the development of “fine painting,” where artists created colorful artwork using expensive dyes and polishes which appealed to art enthusiasts. Rembrandt also painted in a style which evoked drama through lighting and the positioning of figures, which can be seen in works such as the “The Night Watch” and his many religious paintings (Israel 1995, 560-561). “The Night Watch” and the careers of both Rembrandt and Frans Banning Cocq serve as examples of the changing social and artistic climates of the Dutch Republic, and Europe, during the 17th century.