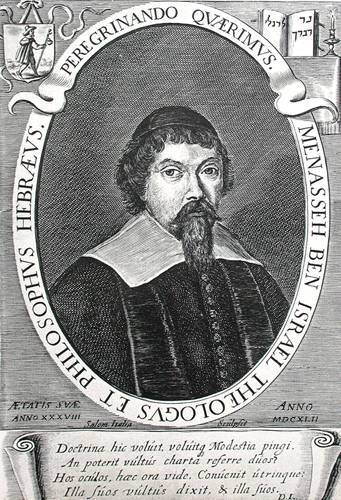 An important element of change in the Netherlands during the early modern period was the widening of religious toleration. This toleration connected with the early Enlightenment thought of figures such as Spinoza, as well as with the political and religious forces present in other countries such as England. Compared to the earlier religious conflicts present during the Dutch Revolt, the Dutch Republic during the mid-17th century and onwards saw increasing religious diversity and involvement.

Menasseh ben Israel, a Sephardic Jewish rabbi from Amsterdam, embodies aspects of the religious environment of the Dutch Republic during the 17th century. Throughout the 17th century, Jewish communities from both Iberia and Germany immigrated to cities like Amsterdam, (Israel 1995, 657-658) and contributed to the intellectual and economic worlds of the Dutch Republic. Menasseh ben Israel serves as an example of this intellectual participation. He wrote texts which discussed the Bible, and actively debated with Christians. These debates brought on struggle, however, as many Christian thinkers were only really concerned with converting the Jewish communities instead of debating religious concepts (Israel 1995, 580-581). The fact that these debates and publications occurred, albeit with cultural friction, is a testament to growing tolerance in the Dutch Republic.

Another aspect of the Dutch religious climate involved the influence of English Quakers, which also interacted with Menasseh ben Israel and other Dutch and Jewish intellectuals such as Spinoza. Margaret Fell, a leading member of the Quakers, published an open letter directed at Menasseh ben Israel in an attempt to convert the Jewish community to Christianity (Popkin 18). The Quakers also interacted with Spinoza, who translated some of their works into Hebrew while in Amsterdam (Popkin 15). Another Quaker, Benjamin Furly, settled in the city of Rotterdam and prepared migrations to North America while also engaging in Enlightenment debates with a wide variety of thinkers (Laborie 359-360). Through figures such as Spinoza and Furly, the Enlightenment, Dutch religious tolerance, and the growing Jewish communities in the Dutch Republic are all linked.