Mapmaking was an important innovation in the early modern period, not only because of the increased precision of the maps, but also because of the cultural attitudes various maps represented. Examining maps made in the Low Countries during a time of political and religious unrest can therefore shed some light on the regional, local, and national conceptions circulating at this time. 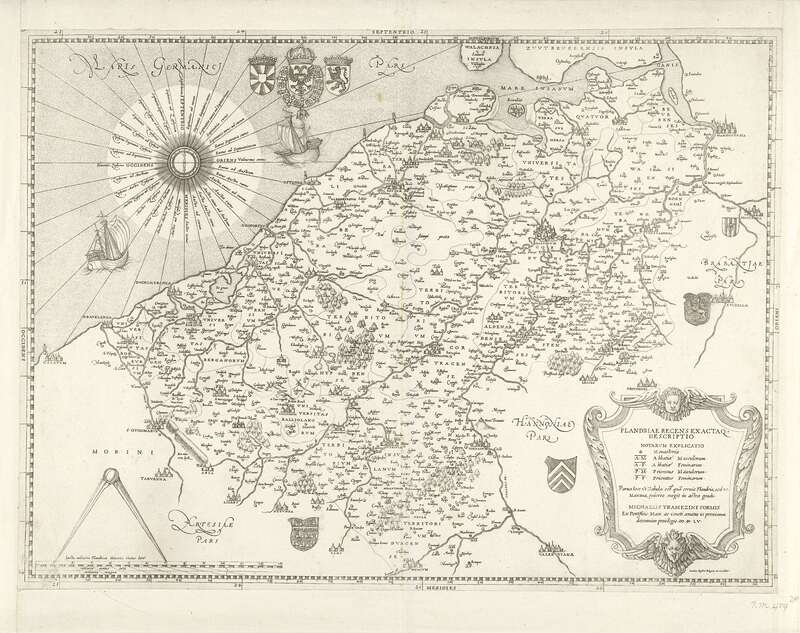 A map of Flanders and Hainaut, two provinces in the Southern Netherlands (present day Belgium)

This map of Flanders and Hainaut was constructed by Mercator following surveys by Jacob van Deventer. The above engraving is one of many engravings of this map, which became the standard map for the region. Historians have postulated that the depiction of the entire region of Flanders as unified was politically motivated, especially considering the anti-Spanish revolts in the city of Ghent which occurred during the map’s creation (Karrow 380). This situation reveals how maps reflect the view individuals had on their political situation. Historian Barbara E. Mundy examined the relationship between individual cityscapes (chorographic maps) and geographic maps in the early modern period. According to Mundy, this relationship “followed the fault lines between regionalism and nationalism [during the 16th century]” (Mundy 5). Maps were therefore tools to reinforce a specific attitude about the power structures in Europe: individual cityscapes stressed the city as the location of power, while national maps attempted to create a picture of a broader, unified nation-state.

Mercator and van Deventer were both mapmakers from the Low Countries. Mercator’s most famous contribution to mapmaking was his world map projection, which was published in 1569. The projection used on this map was most useful to sailors (Karrow 389), however it has since become popular (and criticized) outside of this context. Van Deventer’s works illustrate the duality of chorographic and geographic maps well. Earlier in his career, Van Deventer worked on projects which mapped wider regions and provinces in the Low Countries. In the latter part of van Deventer’s career, King Philip II of Spain hired him to create maps of cities in the Netherlands (Karrow 142). In van Deventer’s life the creation of both wider regional maps meant to inspire provincial unity and insular cityscapes which reinforced the independence of the city can be seen. These contrasting conceptions of power illustrate the tensions between local and national institutions during this period.