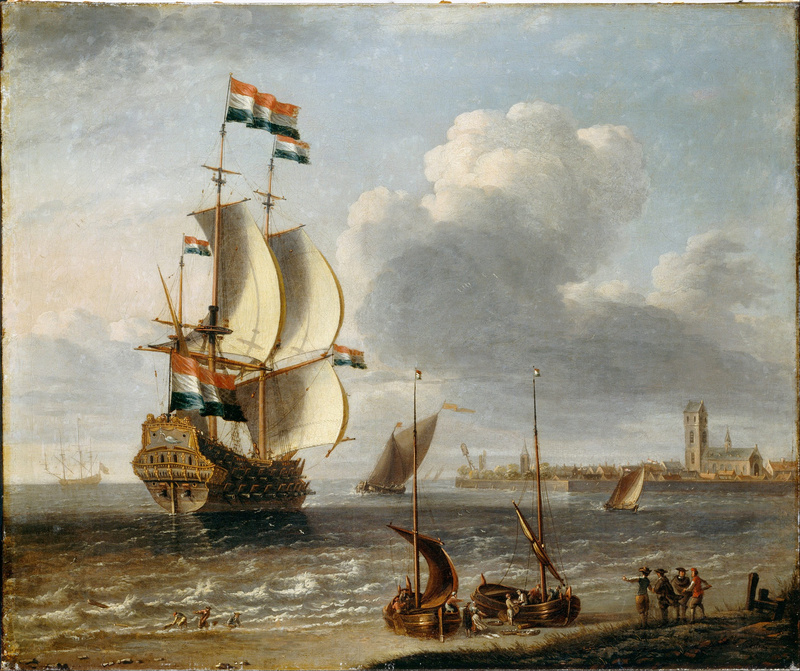 A Dutch East-Indiaman near the town of Hoorn

Like many other European powers, the Dutch Republic engaged in maritime trade both in Europe and with other continents, occupying a dominant place in trade, industry, and finance during the 17th century. The Dutch also participated in imperialist endeavors through trade companies, and were complicit in the slave trade. The Dutch excelled in trade and interacted with other European powers to further their trade interests.

This painting of a Dutch East Indiaman illustrates the prominence of the Dutch Republic in maritime trade throughout the 17th century. Dutch trade interests encompassed a large part of the globe during this time. In the European sphere, the Dutch shipped grain and timber from the Baltic, imported wool and other products from the Mediterranean (Israel 1995, 611), and imported raw metals from Scandinavia and other regions which were then manufactured into munitions such as cannons (Haley 43). Dutch industry flourished from the imports of these raw materials: shipbuilding, textile and linen manufacture, tobacco and sugar processing, and a variety of other industrial trades benefitted from the import and export economy of the Netherlands (Haley 44). European banking, investments, and financial exchanges were centered in Amsterdam as a result of this extensive maritime trade and industry (Haley 41). This trade activity contributed to increasing urbanization in Dutch society, with many rural people moving into the cities to participate in the growing trade economy (Haley 49).

Outside of Europe, conflicts between the Dutch and Portuguese trade empires allowed the Dutch to profit from sugar, gold, and other natural materials, as well as from slavery, in trade with Africa and Brazil (Blackburn 192). Two trade companies were key to trade in the Netherlands: the Dutch West India Company and the Dutch East India Company (or VOC). The Dutch East India Company operated in South Africa, India, China, and Southeast Asia, and dominated the spice trade, while the West India Company operated in the New World and West Africa, and focused on trading sugar (Blackburn 187-188). Dutch trade interests, industry, and financial growth all worked together to make the Dutch Republic an economic powerhouse in the early modern period.