Spinoza and the Radical Enlightenment

A key figure of the early radical Enlightenment was Benedict (or Baruch) Spinoza. After his philosophy alienated him from the Jewish community in Amsterdam into which he was born, Spinoza travelled throughout the Netherlands but avoided publishing his most radical philosophical positions. Ethics is his most significant work, but was published posthumously (Wiesner-Hanks 381).

In Ethics, the early strands of what would later become the Radical Enlightenment can be seen. The following passage from Ethics illustrates a central aspect of Spinoza’s philosophy.

(For the full text of Ethics, which is in the Public Domain, see: www.gutenberg.org/ebooks/3800)

PROP. XIV. Besides God no substance can be granted or conceived.

Corollary I.—Clearly, therefore: 1. God is one, that is (by Def. vi.) only one substance can be granted in the universe, and that substance is absolutely infinite, as we have already indicated (in the note to Prop. x.). 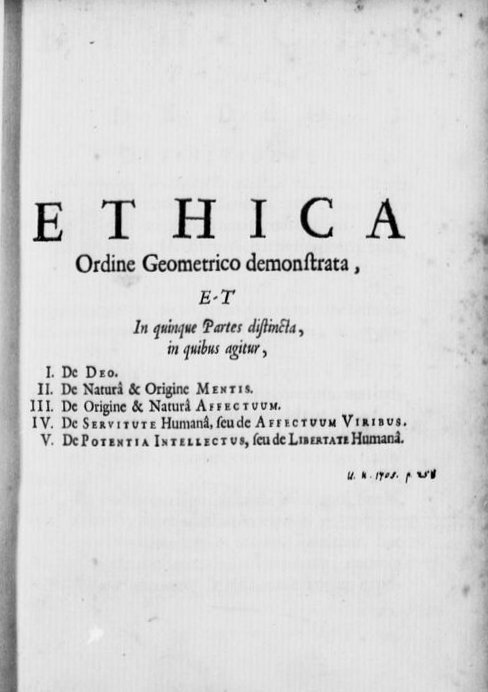 This passage illustrates the “Oneness” Spinoza identified in the universe. For Spinoza, the only substance which can exist or be considered in the universe is “God,” a substance which is infinite and makes up all parts of the universe. If any other substance existed, then it would have to be explained through the lens of God, which means it would be part of God. Spinoza also notably includes thought as a “attribute” of God. Spinoza’s wider argument declares (in leading up to the above proposition) that substances cannot create one another, and thus substances are created by themselves and their existences are inherently tied to their purposes, and thus the conception of God was not created by anything external but rather by God himself which verifies his existence (for Spinoza’s own wording to this effect, see the attached text and Proposition VII).

Spinoza’s works fall within a radical strain of Enlightenment thought. Jonathan Israel claims Spinoza as the “first major figure of the Radical Enlightenment” (Israel 2011, 2). Spinoza’s interpretation of God contains elements of pantheism and determinism. If everything is God, the identification of this unifying substance may not actually align with an actual deity and instead just be a perception of “nature” (Wiesner-Hanks 381), a lack of distinction which extends towards atheism. Spinoza’s contemporary critics and associates often portrayed him in an atheistic light (Israel 2001, 163).  According to Israel, the natural consequence of Spinoza’s ideas was a society which was “more democratic, libertarian and egalitarian” (Israel 2011, 2; see also Israel 2001, 259-262). Spinoza’s place in the subsequent Enlightenment discourse was divided. Some thinkers such as Hume declared Spinoza’s view of God as a “hideous hypothesis” (quoted in Israel 2001, 159), while Radical Enlightenment thinkers such as La Mettrie and Diderot invoked Spinoza’s deterministic and materialist ideas (even while both thinkers outwardly criticized and decried the tenets of Spinozism. Israel 2001, 707-713).

Situating Spinoza in the Netherlands presents an interesting view of the Enlightenment, which is normally focused on France and England. Alongside native thinkers, the Dutch principles of tolerance and free expression attracted English and French thinkers to the region when their ideas did not adhere to the expectations of the more powerful English or French states. Figures such as John Locke and René Descartes wrote and published works in the Netherlands whose publication may have been difficult in their home countries of England and France, respectively (Wiesner-Hanks 344). While the French government attempted to censor the radical ideas of Spinoza and others, the freer publications in the Netherlands continued to circulate the texts, and banned writings were smuggled from the Netherlands to France (Israel 2001, 99). In a figure such as Spinoza, the Dutch proved to be ahead of the curve with the radical ideas they would tolerate for publication and discourse.