The Edict of Restitution: the Last Hapsburg Attempt to Unify Germany 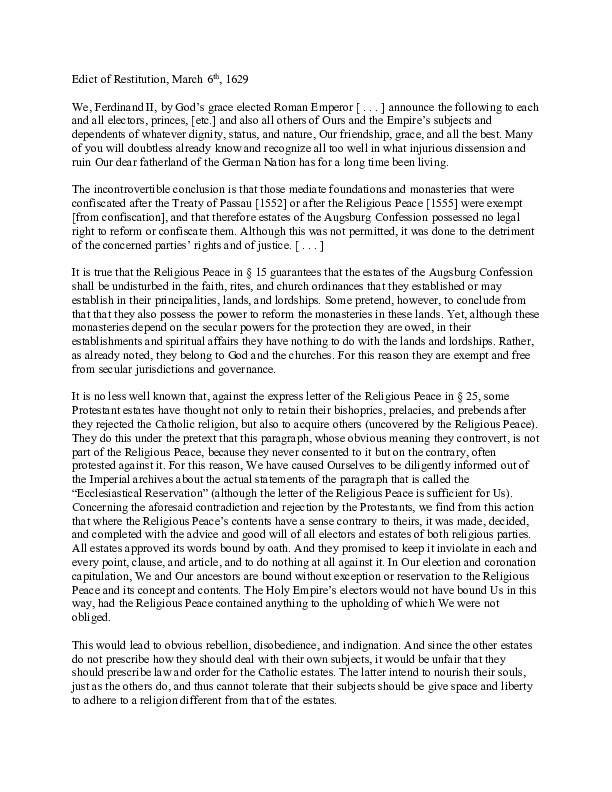 The Edict of Restitution

The Edict of Restitution was published by Holy Roman Emperor Ferdinand II in 1629. It laid out a set of orders that had the potential to marginalize Protestantism in the Holy Roman Empire and pave the way for a centralized and unified Germany.

Ferdinand’s intended audience was for this edict was the Protestant estates scattered throughout Germany. In the Edict, Ferdinand framed his points and orders as being unbiased and done in the name of justice. He did this by claiming that Protestant estates were in direct violation of the principles laid out in the Peace of Augsburg and the Treaty of Passau, citing the illegal conversion of Catholic territories to Protestantism (Brady 2). Furthermore, any grievances that the Protestant states made were refuted by Ferdinand using these same principles (Brady 2). Yet despite his attempts to feign objectiveness, he was clearly biased towards Catholicism due to his end goal of building a more unified Catholic state in Germany. This goal is evident when viewed through the relevant historical context of the time. Over the last eleven years, the Catholic League was having immense success against the Protestant Union in the early years of the 30 Years War (Wiesner-Hanks 322). This shows that Ferdinand’s marginalization of Protestants was an attempt to capitalize on his recent victories by consolidating and expanding his power.

Perhaps the most significant portion of the Edict is the last few paragraphs in which Ferdinand declares that lands, including bishoprics, hospitals, and monasteries, that had converted to Protestantism since the Peace of Augsburg in 1555 must be returned to Catholic rule (Brady 3). Again, Ferdinand didn’t frame this order as an attempt to seize and consolidate power, but as an issue “on which the Peace principally depends”. Another important passage is Ferdinand’s reaffirming of the unlawfulness of other Protestant sects, particularly Calvinism, when he says, “adherents of the Confession of Augsburg have no grounds for complaint that their fellow religionists, who possess or desire to take over ecclesiastical foundations, bishoprics, and prelacies immediate to the Empire” (Brady 2). This again shows Ferdinand's goal of undermining Protestantism in Germany.

Unfortunately for Ferdinand, the string of victories that inspired him to pass his Edict would not last as other countries banded against him in order to prevent his dream of a powerful, centralized German state of coming to fruition (Wiesner-Hanks 322).

← Rudolph II: Patron of the Sciences and Political Disaster
The Peace of Westphalia and German Society Post-30 Years War →
The Edict of Restitution: the Last Hapsburg Attempt to Unify Germany