The Edict of Potsdam: Setting the Stage for Prussia 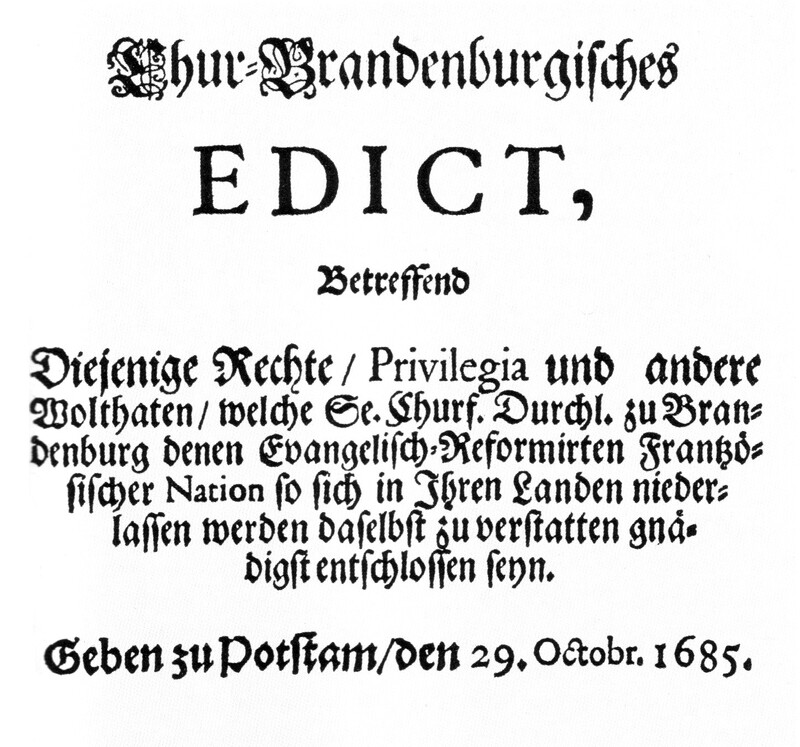 Cover page of the Edict of Potsdam

In 1685 France revoked the Edict of Nantes which resulted in the flight 200,000 - 250,000 French Huguenots out of France (Laborie 5). Ironically, this act of intolerance prompted the start of the trend of state-sponsored religious tolerance that would persist throughout the Enlightenment. This is evident in Brandenburg where the elector, Frederick William, issued the Edict of Potsdam that same year (Laborie 5). This Edict offered religious toleration to the Huguenots (as well as other Protestant sects) and invited them to relocate to Brandenburg and enjoy the freedom of religion (Laborie 5). In the end, about 30,000 Huguenots relocated to Brandenburg (Laborie 5).

However, this pre-Enlightenment wave of toleration should not be associated with the values of the Enlightenment itself. The main reason for this being that the Edict of Potsdam (and other edicts like it) were not passed out of the benevolence of the rulers, but rather their economic and political ambitions (Laborie 19). Brandenburg, for example, was left poor and depopulated following the 30 Years War (Wiesner-Hanks 351). When news broke of the massive numbers of people leaving France, Frederick (and other Northern European rulers) recognized this as an opportunity to rebuild their devastated holdings (Laborie 6).

Regardless of the purpose of the Edict, Brandenburg benefited from the increase in population. The influx of people improved the economy and many of the French refugees became soldiers in the Prussian army (Wiesner-Hanks 352). Frederick William continued to expand Prussian power by adopting many absolutist policies, as seen in him forcing his territories to grant him permanent taxation rights (Wiesner-Hanks 351). All of this laid the foundations for a powerful Prussian state that would even go on to challenge the Hapsburgs, who had enjoyed uncontested dominance of the Holy Roman Empire for centuries.

← The Peace of Westphalia and German Society Post-30 Years War
The War of Austrian Succession and the Decline of Hapsburg Dominance →
The Edict of Potsdam: Setting the Stage for Prussia