The Augsburg Confession and Charles' Failed Attempt to Unify Germany 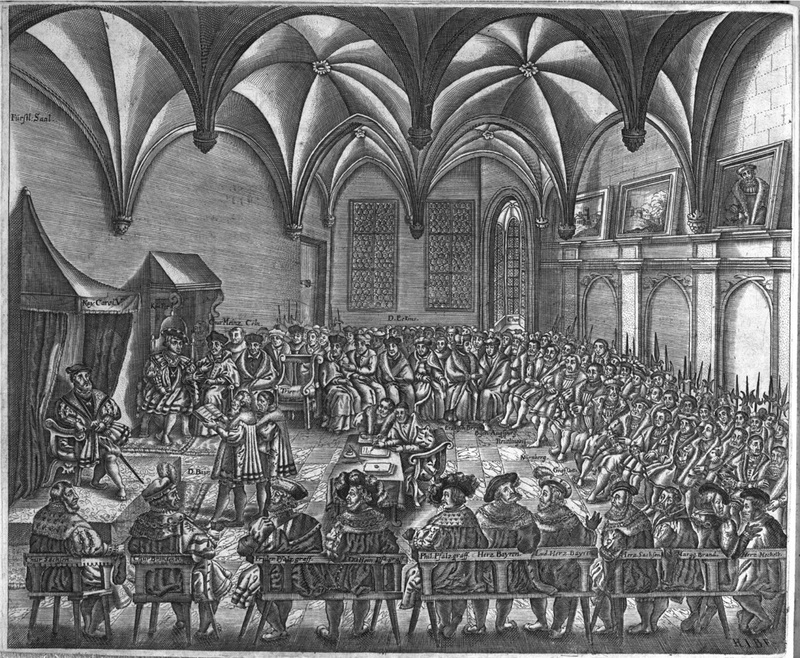 Protestantism had taken Germany by storm in the early 1500s. The Edict of Worms decreed in 1521 at the behest of Charles V declared Martin Luther a heretic and forbade anyone from supporting him, yet this did little to stop the rampant spread of Protestantism through Germany. Nine years later the already loosely united Germany was becoming more and more fractured as protestant political authorities were beginning to form military alliances throughout the nation.

In an effort to bring some unity and consolidation into his empire, Charles the V summoned protestant princes to the Diet of Augsburg in 1530 with hopes to end the religious divide. At this diet, the princes produced the Augsburg Confession, a statement of faith drafted by Luther’s associate Melanchthon that contained the defining principles of Protestant faith (Wiesner-Hanks 181). These principles, like the belief that all should take part in the drinking of the blood of Christ during Eucharist and that salvation is achieved through faith alone, were irreconcilable with the Catholic faith (Wiesner-Hanks 170). Charles refused this text outright and demanded that all protestant princes return to Catholicism by a set deadline. However, instead of quelling the Lutheran princes, Charles's response further escalated the conflict.

The threats of Charles V prompted the Protestant German princes to form a defensive military alliance known as the Schmalkaldic League (Wiesner-Hanks 181). At the core of this alliance was the Augsburg Confession, as entry into the league was based on one’s assent of this document. Charles could not respond militarily as quickly as he would have liked because a majority of this resources were being spent fighting foreign wars against the Ottomans and France. However, conflict was inevitable as Charles V quickly realized that he was not only fighting for religious unity, but also for a unified state (Wiesner-Hanks 182).

Thus, in 1546 fighting began between the armies of Charles V and those of the Schmalkaldic League. While Charles saw many early victories, he quickly faltered after the withdrawal of Papal support caused by fear of Charles becoming too powerful (Wiesner-Hanks 182). In 1555 both sides agreed on the Peace of Augsburg which gave territorial rulers the right to choose whether their province was to be Catholic or Lutheran, thus ending religious war in Germany for decades. This peace firmly established that power lay in the hands of the nobility and ended any hope Charles had for creating a unified German state (Wiesner-Hanks 182).