Provincial Politics and The Peasant Revolt 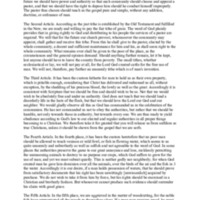 12 Articles of the Upper Swabian Peasants

While Charles V may have been the Holy Roman Emperor in the 1500s, the German princes were nearly completely autonomous with regards to rule over their own holdings. This political structure left the peasants and serfs essentially no opportunity to protest decisions made by their princes nor improve their standing in society. Then in 1524, in light of new restrictions on hunting, increasing taxation, and new labor obligations, a peasant protest began that soon escalated into rebellion and war against their princes and local rulers (Wiesner-Hanks 178).

As the rebellion grew, one peasant group published the document "The Twelve Articles of the Upper Swabian Peasants" which rapidly spread through Europe. This document, which lists the grievances and demands of the peasant army, was inspired by Luther’s ongoing protestant reformation. Despite not having Luther’s personal support in their revolution, the peasants claimed that the Protestant ideal of individual faith and the sola scriptura (scripture alone) supported their claims. Accordingly, nearly all of the peasants’ arguments made in "The Twelve Articles" stem from their interpretation of the Bible or their belief that their oppression lacks biblical justification (Baylor 21). Article three exemplifies this when it asserts that because Christ has already redeemed humanity that peasants cannot be the physical property of their lord. The peasants make similar arguments based on scripture against the practice of forced labor and restricting hunting regions (Article 4, 6).

While the peasant armies saw victories early on, their revolution was doomed to fail. Over 100,000 peasants died, and the end result was more oppressive policy than before. However, contrary to common belief, the peasant army wasn’t a mob of pitchfork-wielding farmers aimlessly plundering the countryside but rather an organized military led by some men of experience that had its own political structure (Baylor 22). Should the peasants have been successful it would have meant a dramatic shift in the balance of power away from provincial officials to the local peasant communities.