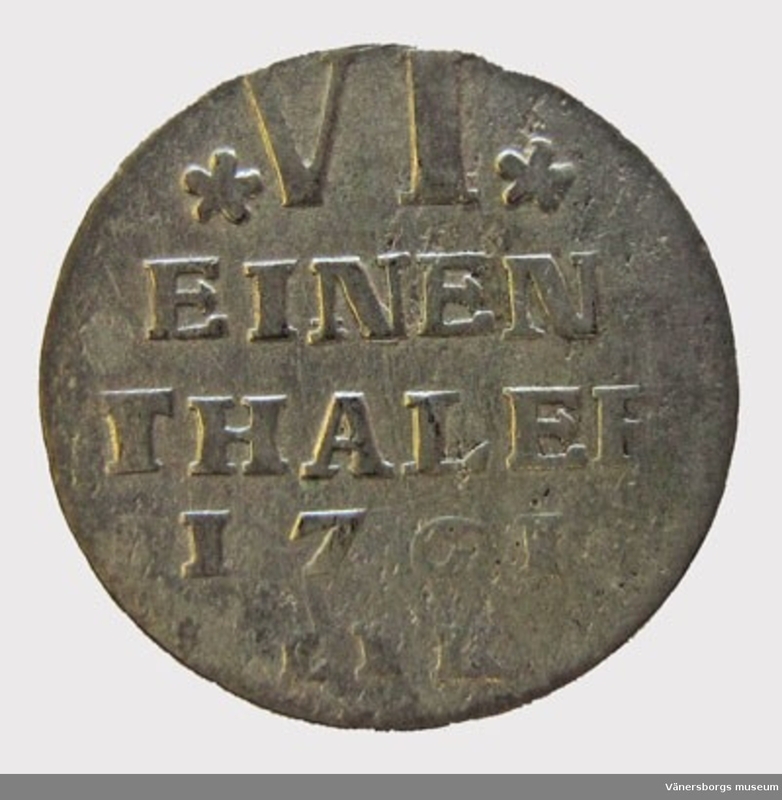 A silver thaler likely originating from northern Germany in 1761. Remember that the thaler emerged in thr sixteenth century. Why do you think coins persisted for so long? How can we see currency changing?

The thaler, a coin widely used throughout Europe since the 16th century, was considered by many to be a standard currency of the era. This particular silver coin, however, was minted in 1761 in northern Germany near the end of its popularity. The death of the thaler was indicative of the much broader economic developments throughout the 18th century.

The German economy experienced especially dramatic changes throughout the 17th and 18th century. The aftermath of the Thirty Years War left the economy uniquely volatile to the wider disruptions felt throughout Europe in this "Age of Crisis". Commerce throughout this period became quite stagnant as a result of unstable price signals and depleted resources. These failures of price signals and subsequent inflation required an entirely new approach to monetary policy. The role of the state, therefore, became a central consideration of this era. Perhaps the war was most felt in the German countryside where "a survey in the abbey of Ottobeuren found only 133 horses and 181 cattle in 1636, compared to 2,094 and 6,607 respectively 16 years earlier" (Wilson, 801). The state's role, therefore, was in part a response to the destruction experienced by rural communities and the demands of the struggling German farmer.

A gold castellano from 1474. The Spanish Crown assumed a very active role in circulating gold and silver coinage throughout the kingdoms. How did their overseas colonial project influence economic dynamics in the domestic sphere? What did inflation mean to a Spanish villager?

Minted five years after the marriage of Queen Isabella and King Ferdinand, this Spanish gold coin represents the increasingly unified economy of the Iberian peninsula.

The marriage of King Ferdinand of Aragon and Queen Isabella of Castile was perhaps the most consequential moment in the economic trajectory of early modern Spain. More than just a marriage of two significant monarchs, it was more importantly a unification of two kingdoms that would come to challenge the political order of western Europe. The reign of Queen Isabella and King Ferdinand was characterized by ambitious institutional reforms, strict enforcement of religious uniformity, and a far-reaching colonial project to expand empire. In fact, it was Queen Isabella herself who funded and authorized the first voyages of Christopher Columbus, a development that would prove to reshape the economic landscape of Europe for centuries to come. Throughout their reign, King Ferdinand and Queen Isabella navigated intense social upheaval throughout the kingdoms and often responded to the demands not of the clergymen and nobles, but of comuneros whose national movement called for reforms to the very mechanism by which the Crown could mint its currency (Cowans, 47). Indeed, the grievances of the Spanish townspeople extended even to the state's monetary policy. That is not to say, however, that early modern Spain experienced uninterrupted expansion of its domestic economy. The crown's failed monetary policies proved disastrous, as gold coins such as this became increasingly valueless and price signals could not stabilize in response. By 1652, villages in Andalusia broke out in riot as commoners demanded a lower exchange rate and more affordable goods (Cowans, 173).

← Global Reach and the Age of Discovery
Bibliography →
Monetary Policy