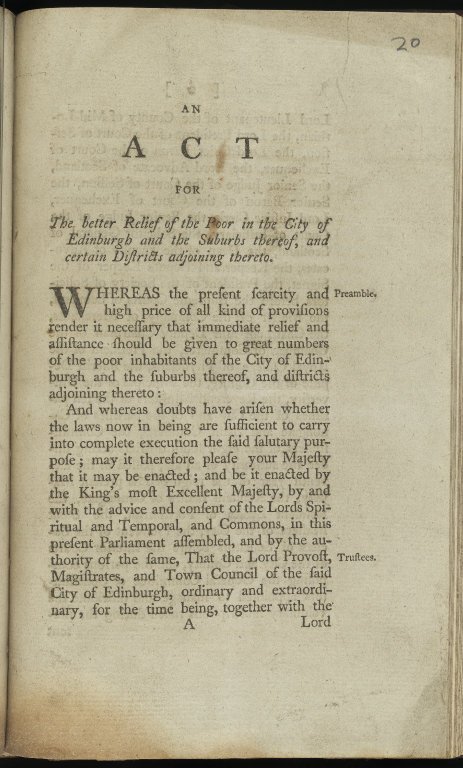 Notice that the act begins with: "Whereas the present scarcity and high price of all kind of provisions render it necessary that immediate relief and assistance should be given to great numbers of the poor inhabitants". How did the poor shape state policy? How did state policy shape the lives of the poor?

An Act for the Better Relief of the Poor

Passed in Parliament near the end of the 18th century, this act sought to expand programs for the lower classes within the city of Edinburgh. “Poor Laws” such as this can trace their origins in England and Scotland to the late medieval era. However, as the bureaucracy of the state expanded throughout the early modern era, so too did the scope and structure of its social programs. Great political philosophers such as Thomas Hobbes, John Locke, and Jean-Jacques Rousseau presented new understandings of the role of government in civil society and played a key role in the development of Western social contract theory.

Robust social welfare programs in the early modern era were largely a response to the breakdown of the medieval social structure and pervasive poverty rates in both the city and countryside. Especially in Elizabethan England, the state played a very active role in aiding both the disabled and able-bodied poor. In Scotland, however, poor laws were a direct response to the demands of the countryside, with George Strickland explaining "that so long as Scotland continued to be a purely agricultural country, her population thinly scattered, and therefore never experiencing the miseries which fluctuations in employment and in the price of food bring upon labourers collected together in greater numbers, these laws may not in many parts of the country have been strictly enforced" (Strickland, 60). 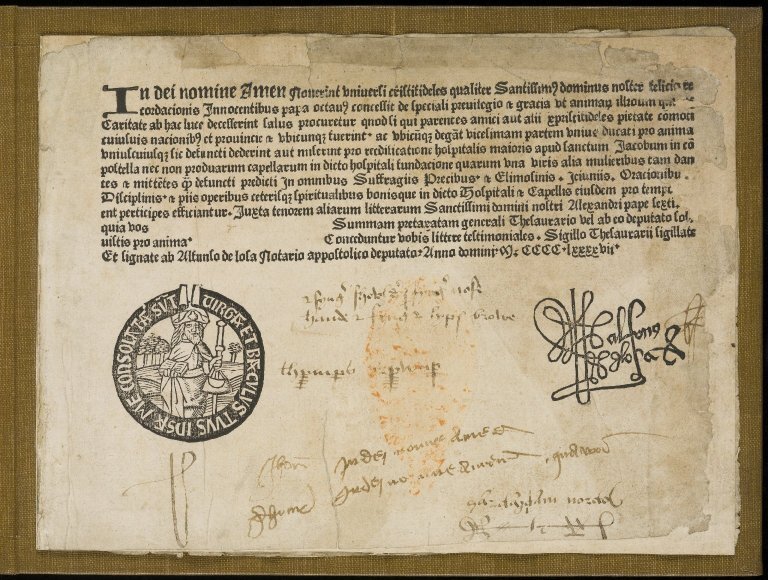 An indulegence issued through the pilgrim shrine of St. James, Compostela in Spain around 1497. What was the place of the Church in Europe's economy? How did the Church shape Europe's institutions?

Printed in Westminster in 1497, this papal indulgence was issued for the pilgrim shrine of St. James, Compostela in Spain. Throughout the late medieval age, indulgences such as this would have been paid through the Church as part of a process of penance and remission from the temporal punishments of sins.

Just as empires accumulated great wealth during the Age of Discovery, so too did their churches. The evolution of Europe’s economy necessitated the adoption of common currency methods, facilitating more universal exchanges of goods and services and allowing money to become a common language throughout European empires. Much like the Church, the authority of the banknote was an unquestioned reality of early modern European life. So long as money was legitimate in the eyes of the Roman Catholic Church, churchgoers held that even grave sins could be absolved through one of these simple monetary exchanges. These exchanges did not, however, go unchallenged. Indulgences such as this would become a central critique of Martin Luther’s famous 95 Theses, as he accused the Church of commercializing the process of penance. Although Luther fundamentally challenged the foundations of the papacy, we will later see the Church continue to extend its wealth and influence throughout Europe’s growing global hegemony.