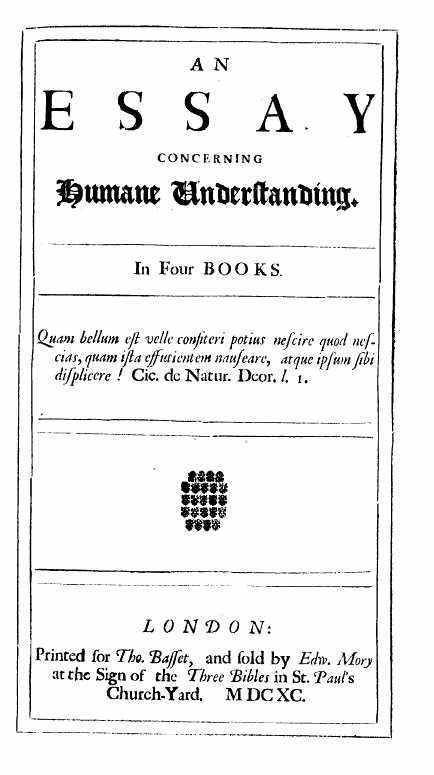 Locke's ideas regarding sensory perception and its contribution to humans' rational thinking were central to the Enlightenment.

A court physician, ethical thinker, and political player, John Locke’s ideas figured prominently in the mainstream Enlightenment. His Essay Concerning Human Understanding put forth his thoughts on the origin of human knowledge. He wrote that everyone is born as a “tabula rasa,” or “blank slate,” which had important implications for the prominence of education in society. According to Locke, our senses and perceptions provide a pathway for simple thoughts and then for complex thoughts. It is only then that we are able to reason, but once we reach this point, he argues, that we have to fight against our natural inclination to act contrary to what we know to be best for us. Moreover, humans are born with reason rather than acquire it through the events of their lives. However, reflection plays a large part in the effectiveness of turning perceptions or simple thoughts into complex ones, thereby warranting the usage of reason.

Wiesner-Hanks writes that Locke “picked up on Francis Bacon’s emphasis on experience, observation, and sense perceptions as the true basis of knowledge,” alluding to the continuity of Bacon’s ideas throughout the Enlightenment and the increasing inclination of scholars to base their hypotheses about nature on the happenings of the physical world rather than on religious dogma (Wiesner-Hanks, 382).

Locke’s writing during the Enlightenment represents the large conversation prominent thinkers engaged in, as well as the rise of political philosophy that he took part in. The reason he argued was born innate in every human had implications for politics of the era, and his ideas about private property -- and the limits to a monarchy’s power when it came to private property -- found new meaning in terms of opposing tyranny. However, his ideas formed the basis for the popular conviction that only property-owning people should be able to vote, which extended to America prior to the nineteenth century (Wiesner-Hanks, 383).

Francis Bacon was a natural philosopher from England who introduced the scientific method through two publications, The Advancement of Learning and Novum Organum. To him, the basis of natural philosophy could be found in observation (Wiesner-Hanks, 374). His scientific method involved the formulation of a hypothesis, multiple tests, and the establishment of a conclusion that would then be repeatedly tested.

Bacon’s life and work demonstrate the nonlinear development of science during the Scientific Revolution. Bacon was still a champion of alchemy, and many of his colleagues thought as he did. However, the shift from alchemy to chemistry came gradually, as “by the eighteenth century, those who experimented on the natural world tended to define forces or substances they could not see in material rather than spiritual or mystical terms” (Wiesner-Hanks, 375). Certainly, while Bacon’s alchemical ideas did not stand the test of time, his scientific method did.

One common theme of the Scientific Revolution was the idea that science could be used to benefit society, and thus deserved funding directly from the monarchy. Bacon took this stance, as did Antoine Lavoisier, a chemist who performed many of his experiments on topics he thought would better serve the populace, such as agriculture and the military (Wiesner-Hanks, 375). In this way, the underpinnings of Bacon’s literature developed throughout the late 1700s, and natural philosophy made way for science as we understand it with the further development of the scientific method.

← Political Texts
England and the Atlantic →
Roots of Knowledge