The English Bill of Rights was a cornerstone in Parliament's battle against the monarch for more power.

The English Bill of Rights was a revolutionary document that afforded more authority to Parliament. It was written as a response to the absolutist ideas and actions of the Stuart monarchs. Absolutism dictated that a monarch’s power was God-given, which meant the monarch retained most of the state’s power, and, in the case of England, left very little for Parliament (Wiesner-Hanks, 318).

In 1689, England was still plagued with religious and financial conflicts. After James II followed his brother Charles in assuming the English throne and appointed Catholics to several important positions within the government, the worried English Parliament put young Protestant rulers William and Mary on the throne (Wiesner-Hanks, 342). William and Mary conceded to the terms laid out in the Bill of Rights, and agreed in part to tentative religious toleration (Wiesner-Hanks, 343). This period was known as the “Glorious Revolution.”

Among other things, the Bill of Rights called for freedom of speech during Parliament debates and free election of Parliament members. The Bill also sought to limit the financial and military powers of the monarch. Its adoption by the Protestant William and Mary is further proof of England’s gradual shift toward a modern nation-state. However, enduring conflict between Catholics and Protestants of the era indicates a lack of secularization in government, particularly in England. 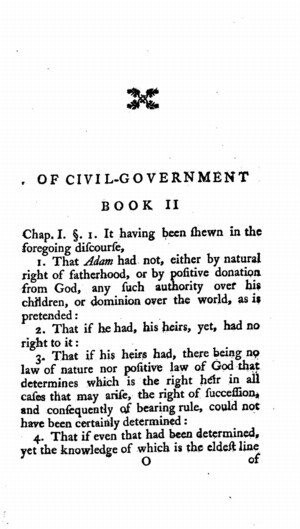 In his Two Treatises, Locke criticized absolutism and the supposed divine right of rulers.

John Locke’s Two Treatises of Government reflect the anti-absolutist sentiments woven throughout England’s political fabric. He outlined the Law of Nature and how it granted each person the right to life, liberty, health, and property, maintaining that one owned a resource -- say, a certain plot of land -- if one put one’s labor into it (Locke). Locke’s views on private property were relevant in the New World as well as in the Old. In England, they sowed the seeds for discord as peasants became increasingly cognizant of ownership and complained to the nobles about taxation; in America, both the Puritan work ethic and the mindset that labor equaled ownership presented a unique problem for colonies, involving not just the rulers overseas but the Native Americans who had already established their own civilizations (Locke).

Though Locke supported government over anarchy due to his belief that society was integral to maintaining order and keeping man’s inherent selfishness in check, he was a prominent proponent of social contract theory, which requires consent of both the ruler and the ruled for the contract to be validated (Locke). Moreover, he asserted the right of the ruled to overthrow their ruler when their rights were infringed upon (Locke). These ideas were essential to the philosophy underlying later revolutions, including the French Revolution.