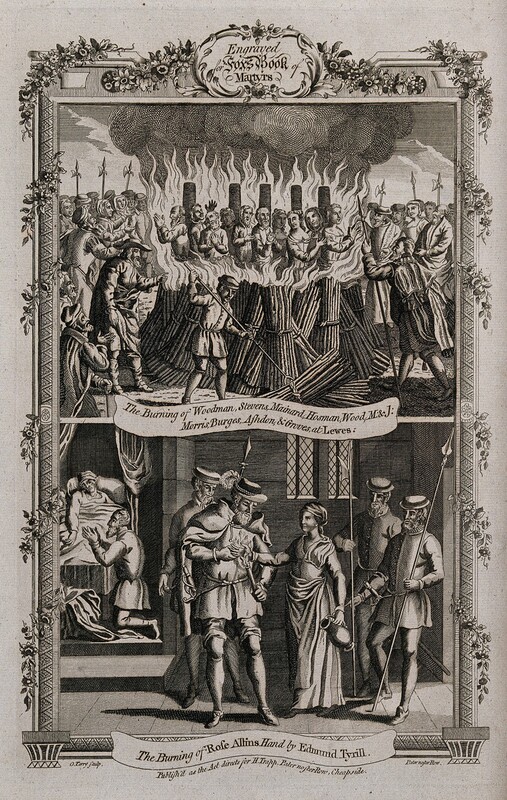 John Foxe's Book of Martyrs depicted the prosecution of Protestants at the hands of Catholic Mary Tudor.

The image selected is an engraving of two scenes from John Foxe's Book of Martyrs. The book was originally printed via woodcut, a method of printmaking in which blocks of wood were engraved to depict a certain scene, covered with ink, and then pressed to paper. Foxe’s work was universal in the sense that the illustrations, gruesome as they were, allowed for the illiterate to fully comprehend the scope of the violence inflicted upon Protestant martyrs.

The book is a response to the brutality of the Protestant Reformation (particularly under Catholic Mary Tudor's reign from 1553-8), as well as an informative and instigative tool for those who took issue with the encroachment of Catholicism upon England (Wiesner-Hanks, 9). So many Protestants were killed during this time that John Foxe began to catalogue their deaths via printmaking. Evidently in favor of the Church of England, Foxe's book remained a fixture of the English Reformation, which sought to divert Roman Catholic authority from the crown.

Foxe’s Book of Martyrs exists now, as it did then, as a record of Protestant persecution: it clues readers in to one aspect of the greater religious conflicts of the Reformation years. Moreover, Foxe’s perspective represents that of a learned Protestant (learned in the sense that he studied the classics) moved to action such that he worked to disseminate all that he had witnessed across borders -- not only does he relate stories of violence from England, but the book’s twenty-two chapters cover Germany, the Netherlands, and French Protestants. In essence, Foxe’s Book of Martyrs is a prominent example of art/literature created to convey a specific religious and political message.