Turning the Tides: Information Exchange throughout the Maritime World 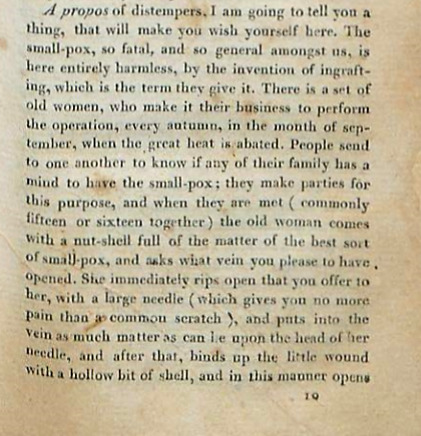 A letter from Lady Montague to Mrs. S.C. sharing her experience with smallpox inoculations in Adriane in the Northwest of the Ottoman Empire.

It is often noted that the expeditions of Europeans throughout the world and their contacts with other cultures led to a tremendous flow of information. Yet, this is too often viewed as a one-way street, with Europeans passing along knowledge, guidance, and technology to ‘less Enlightened’ people. While we often speak of the material goods that Europeans gleaned from these areas, crops from the Americas, gold from Africa, and porcelain and silk from Asia, considerably less attention is paid to the knowledge and ideas that were brought to Europe from different cultures. It has been noted that the Scientific revolution encouraged a more cohesive scientific and cultural community across Europe. This led to an expansion in communication between intellectuals in different parts of Europe and the increased travel of the nobility and aristocracy for exploration and intellectual betterment (Wiesner-Hanks, 368-369). Later Enlightenment thinkers, likewise, repeatedly avowed the importance of guiding other ‘lesser’ societies to Enlightenment by imposing European systems of government and economies on them (Wolloch, 352).

In actuality, however, the exchange of information was far more reciprocal than is commonly explored and non-Europeans had a wealth of knowledge to share with European explorers, merchants, and later, colonizers. This transmission of knowledge to Europe can be seen in a letter sent home by Lady Mary Wortley Montague, an English aristocrat and ambassador’s wife, living in the Ottoman Empire, to a friend in England. She writes of an early method for vaccinating children against smallpox which she intends to try to prevent serious illness in her own children.

“People send to one another to know if any of their family has a mind to have the small-pox; they make parties for this purpose and when they are met... the old woman comes with a nut-shell full of the matter of the best sort of small-pox, and asks what vein you please to have opened. She immediately rips open that you offer to her, with a large needle (which gives you no more pain than a common scratch) and puts into the vein as much matter as can lie upon the head of her needle, and after that, binds up the little wound with a hollow bit of shell, and in this manner opens four or five eins...Then the fever begins to seize them, and they keep their beds two days, very seldom three. They have very rarely above twenty or thirty [sores] in their faces, which never mark, and in eight days time they are as well as before their illness” (Wortley Montague, 109-110).

This technique was, indeed, brought back to England though it was not widely employed until the end of the 18th century (Wiesner-Hanks, 300). Yet, this case illustrates the effects of the shrinking world during this period and the ability of Europeans to gain valuable information (knowledge that could save lives) from other cultures. More efficient nautical routes and consistent trade were allowing the dissemination of ideas through a world-wide network that led to a freer exchange of knowledge. A web of communication that worked in all directions and, in hindsight, stem the tide of ideas on European Superiority.

← Spanish Exploration and Conquest in the Americas
The Politics of Maritime Power: The Russian Empire →
Turning the Tides: Information Exchange throughout the Maritime World