The Legacy of the Early Modern Period: European Colonialism 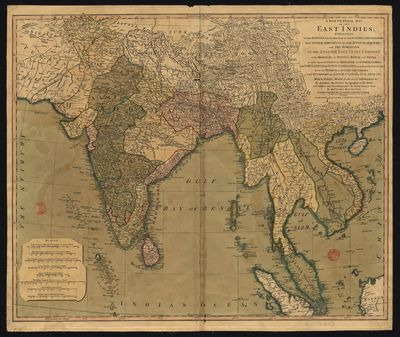 A late 18th Century map of the East Indies including the Mogul Empire and the dominions of the British East India company as well as French and Dutch possessions. Circa. 1794.

The beginning of the 18th century saw the final years of the Enlightenment and the beginning of a new era defined by colonial expansion. If maritime history during the early modern period was characterized by exploration and conquest, the 19th century  was to be characterized by colonization. By the end of the early modern period, Europeans had already colonized most of the Americas, and had forts and trading posts all along the West Coast of Africa and throughout Southeast Asia (Wiesner-Hanks, 494). The following century would see the European takeover of India, Australia, and the partition of Africa that gave Europeans dominion over much of the world. Yet the end of the slave trade during this period and the liberal ideals of the Enlightenment seem an unusual environment for the growth in colonialism.

If fact, this incongruity has led to a historiographical debate over the actions and intentions of progressive thinkers during the Enlightenment and the role that they played in the establishment and longevity of Empire. Jonathan Israel, a scholar of the Radical Enlightenment, for example, emphasizes racial motivation for European dominion throughout the world, stating that the moderate Enlightenment leaders “often inclined to theories of racial superiority and European...superiority in civilization and religion...This was the usual method of explaining and justifying colonial rule and economic control” (Wolloch, 354). This theory suggests that the liberal principles of equality and liberty that supposedly defined the end of the 18th century were simply ignored when it came to groups of racial “others” which allowed for the justification of colonization of non-white areas. There is, however, another camp of scholars who claim that Enlightenment leaders who supported colonialism did so from a rational (albeit highly Eurocentric) perspective. Historians such as Jennifer Pitts have argued that the support of colonial rule was not based on race, but rather on the theory that only through colonization could Europeans bring development and Enlightenment to non-European societies. These historians cite the works of John Stuart Mill who wrote in his Principles of Political Economy that “it may be said without exaggeration that the great extent and rapid increase of international trade,...is the great permanent security for the uninterrupted progress of the ideas, the institutions, and the character of the human race” (Wolloch, 355). Historians such as Pitts view these ideas of the Enlightenment as an effort to progress humanity albeit a very paternalistic endeavor.

Regardless of the motivation of 18th century intellectual leaders, colonialism did come to define our modern concepts of race and to greatly exacerbate levels of racial inequality throughout the world (Wiesner-Hanks, 521). Hopes of assimilation held by men like Mill began to disappear when faced with the realities of Colonial life and the strengthened belief in the immutability of race (Wiesner-Hanks, 527). Instead, highly racialized systems of government were established that lasted throughout the colonial period. Remnants of these systems could be seen well into the 20th century in the form of Apartheid in South Africa and Segregation and Jim Crow laws in the United States. These forms of racial domination and European imperialism can trace their roots directly to the voyages and conquests of the early modern period, as Europe found a way to dominate the oceans and to create its version of a modern world.