European Mercantilism in the Atlantic and Indian Oceans 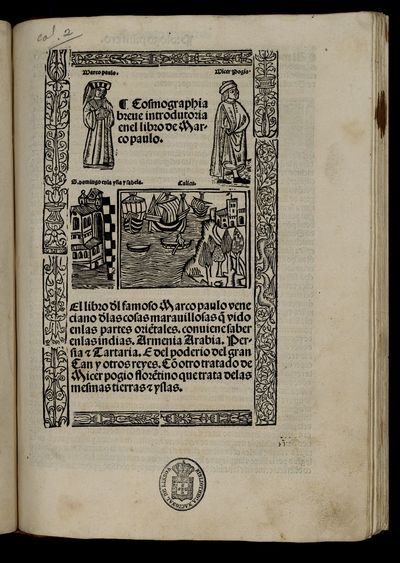 A book by the Venetian Marco Polo of his travels in Asia, including the Indies, Armenia, Arabia, Persia, and Tartary (much of Northern Asia including large parts of Russia, China, Mongolia, and Central Asia).

During much of the period known as the Middle Ages, it has often been believed that Europeans focused inwards, foregoing a knowledge of the outside world in the harsh years of plague and religious intolerance. This misconception, however, greatly underestimates the importance of voyaging and trade during the late Middle Ages the and they ways in which they impacted the age of discoveries, led by the voyages of Italian Marco Polo, that was to follow in the early modern period. Prior to the Renaissance, trade routes crisscrossed much of the known world with merchants trading across ports in the Mediterranean Sea, Indian Ocean and even the South China Seas (Wiesner-Hanks, 241). These connections led to the strong international trade systems that characterized the early modern world, and the increased ability of Europe to facilitate much of this trade. The 1490s saw a rapid expansion in potential trade routes with Spain’s discovery of the Americas and Portugal’s rounding of the Cape of Good Hope. Not only did this open the entirely new realm of the New World for European exploration (and eventually exploitation), but also allowed Europeans to enter the Asian goods markets while cutting out the many middlemen that had previously been used for the long sea and land voyages that transported goods to Europe (Musgrave, 163).

This is not to say that Europe had an equally important role in all trading areas during this period. While it is generally accepted that Europeans dominated commercial activity and trade in the Atlantic world, they were comparatively peripheral in the Asian markets and trade within the Indian Ocean until the 18th century (Wiesner-Hanks, 268). In Asia, merchants and companies directed trade, unlike governments in other parts of the world. This meant that the Europeans often had a weaker hand. This was compounded by the fact that Asia was characterized by very strong governments with sophisticated militaries that were often lacking in other parts of the world. Europeans also entered this market in a weaker position to trade. They were looking to trade in Asian luxury goods which were far superior to European manufactured goods during this time. Given this, and the fact that Europe had comparatively few natural resources, Europe was forced to pay for their goods in bullion imported from the Americas, which did not stimulate their economies in the way that traditional trade in goods might have (Musgrave, 169-172). All in all, despite the massive and rapid expansion in the realm of European trade, European domination was far less apparent than is commonly believed. In fact, it was not until the colonization of India and the partition of Africa in the 19th century that European economic preeminence in the world became firm.