The Politics of Maritime Power: The Russian Empire 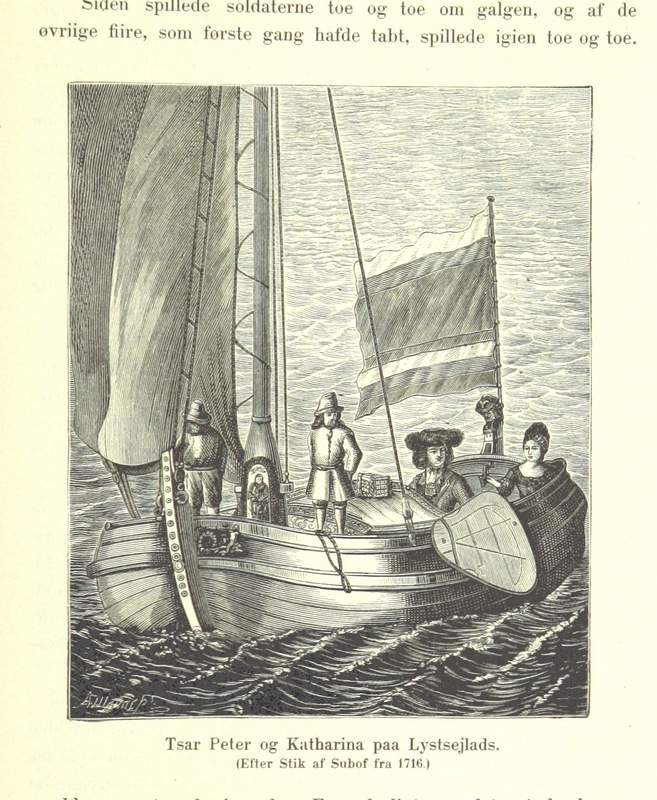 An image depicting Tsar Peter and Katherine on a voyage to Russia in 1716. From the diary of Vice Admiral J. Juel, Illustration by G.L. Grove.

In addition to economic and military considerations, politics and prestige were often an important driver in the quest for maritime dominance during the period that saw the rise of the nation-state. This is epitomized by the endeavors of Russia’s first emperor, Peter I, or Peter the Great (r. 1682-1725) embodied the transition of Russia into a ‘Europeanized’ power during the early 18th century. He was determined that Russia should gain international recognition among the great powers of Europe and worked to bring the culture and reputation he felt would lend greater credence to Russian superiority. He did this primarily through an attempt to bring Russia more closely in line with Europe, particularly Western Europe. This is most clearly remembered in his erection of St. Petersburg as a grand European city on the Baltic. To research and promote this project, Peter traveled extensively in Europe and hired experts from major Western European cities into Russia to complete architectural and engineering plans for the grand city (Wiesner-Hanks, 357).

Despite his imitation of Europe, Peter was not content with emulating the power and prestige of other European nations; he wanted to show Russian dominance and present himself as a significant European leader. Peter, of course, already had significant resources at hand as the tsar of the largest European nation, with an enormous population of serfs. However, one point in which Russia consistently fell behind was in naval and maritime power. While this may seem ironic given the enormous length of the Russian coasts, Swedish dominance in the Baltic Sea and the strength of the Ottoman Empire in the Black Sea, served to isolate Russia from the rest of Europe (Wiesner-Hanks, 357). This circumstance gave Peter the impetus for a massive reorganization of the military, introducing conscription and the training of military officers to offer Russia a chance of defeating the disciplined Swedish military in the Baltic (Wiesner-Hanks, 357).

Peter was, likewise, very interested in investment in overseas colonies similar to those held by many Western European nations in the Americas and the East Indies. Shortly before his death, he sent Vitus Bering and Alexei Chirokov on a mission east to explore the potential for Russian expansion beyond the Kamchatka Peninsula. Because no European explorers had yet to explore the Northwest coast of the Americas, it was unknown what lay east of Russia. Indeed there were many rumors that Russia was in fact connected to the Americas through a land bridge, and Peter was interested in claiming this land for his Empire. Setting off in 1724, Bering and Chirokov had to travel the length of Russia before constructing ships on the coast of Kamchatka. While they discovered little beyond Siberia on their first voyage, it was during their second expedition in 1741 that Bering and Chirikov finally found land in the Americas, spotting islands in Southern Alaska. Despite Bering’s death on the return voyage, Russia laid claim to this new territory which offered a wealth of resources until it was sold to the United States in 1867.

Author’s Note: It should be mentioned that the author grew up in Southeast, Alaska, once the political and economic center of Russian-America, and one of the few places in the United States where double-headed eagles and samovars are still common. In this area, the voyage of Bering has taken on a Columbian status and she, therefore, utilizes information that is commonly held within this area.

← Turning the Tides: Information Exchange throughout the Maritime World
The Decline of the Spanish Empire: Spanish Political Economy in the 17th Century →
The Politics of Maritime Power: The Russian Empire