A Philosopher Lecturing on the Orrery 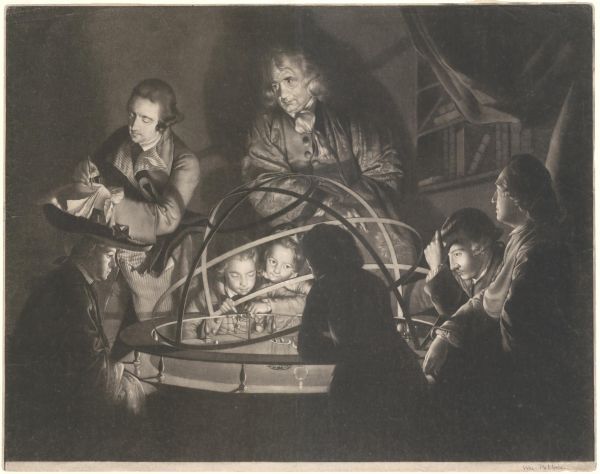 A Philosopher Lecturing on the Orrery

This is a print from the original painting by Joseph Wright depicting a philosopher lecturing on the orrery, or mechanical model of the solar system, and intellectuals used them “as pedagogical devices used exclusively for demonstration” (Barker 31). Enamored by the relationship between light and dark, Wright mimics that contrast in his painting with an unidentifiable light source that illuminates the orrery while casting shadows on the philosopher and the children. This coincided with the scientific revolution and increased communication across Europe through the network of the Republic of Letters as well as characterized the Enlightenment period and its science scene. The various ages and sexes depicted in the painting also corresponds with the Enlightenment and specifically Locke ideas that human knowledge comes from sense experience, such as this visual representation that the children see in the lecture from the painting. Kant’s definition of Enlightenment and having the “courage to use your own understanding” demonstrates the increased resonance of the responsibility of individuals for their education, and interactive components of children’s education encouraged such a concept.

This painting becomes emblematic of the communication and interaction of notable philosophers within Europe as opposed to just foreign communication with individual countries.

The University of Melbourne