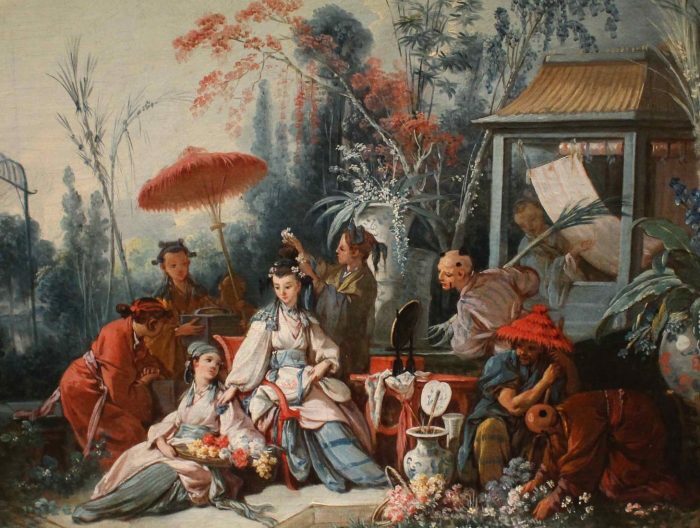 Francois Boucher, a notable rococo painter of the 18th century, developed a keen interest for ‘the Orient,’ and produced a variety of paintings depicting Chinese subject matter, architecture, and themes. Being an armchair traveler, he based his prints off other drawings and paintings by European authors such as Montanus, whose seated woman in Women with fans and a dog he quotes in the central seated female in the painting (Stein 603). Image grafting, or keen observation of other prints to build up his paintings does not imply ethnographic accuracy because a lot of the prints he looked at were by others who were not from China. For example, the “illustrations to Montanus… were originally intended to portray Japan, not China” (Stein 603). Perrin’s writing also reveals a level of communication between Boucher and notable philosophers of the time like Diderot who might have been disturbed by Boucher’s simple lifting of motifs to place them in the Rococo style and claiming them as his own (Stein 602). This communication with members of the Enlightenment circle highlights the connectivity between intellectuals and artists during this time.

It is worth noting that the Qing dynasty welcomed many European artists during its reign, most notably the ItalianJesuit Giuseppe Castiglione, known as Lang Shining in China, who also altered Chinese art in mimicking European oil painting techniques. This demonstrates that the hybridity of subject matter and style traveled in both directions in the 18th century.