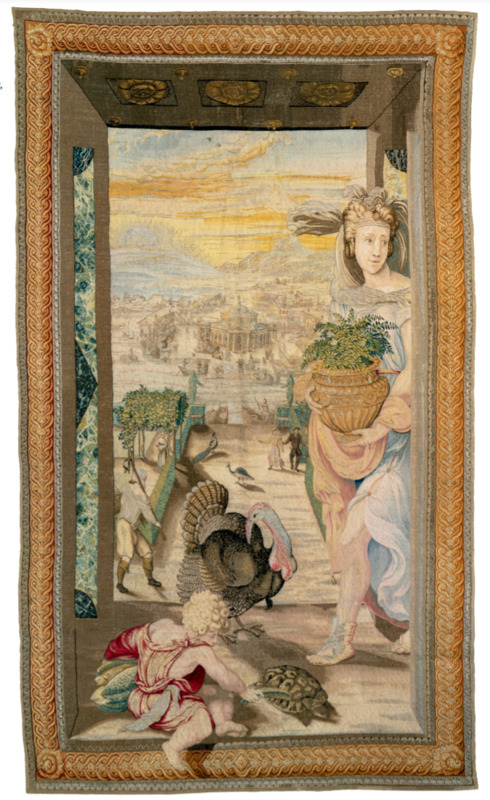 This tapestry was the first work from Florence of a new tapestry workshop founded by Duke Cosimo de’Medici in the 1540s. Around two meters tall, it was likely used as a door hanger, and a later inventory lists it as a “dovizia with a landscape,” dovizia meaning abundance, but the name also also “encompasses the idea of wealth, prosperity, and fecundity” (Markey 17). An already common allegorical figure in Florentine art, Dovizia is now accompanied by a turkey in the center of the tapestry. While the other animals and details carry other meanings such as the turtle which reflected Augustus' ancient motto "make haste slowly," the turkey redefined some of the symbolism of the flora and fauna from America (Markey 17). The Duke and his wife experienced these items secondhand if at all, but they were avid appreciators and collectors of American goods which led to the Duke's development of the first botanical garden of Pisa. Other New World goods also were woven into the fabric of tapestries, such as maize which was cultivated “in Rome as early as the 1510s” and then appeared on fresco borders (Markey 21). Even while not playing an active role in American conquest, the Duke promoted artwork including grottos, frescoes, and this tapestry, which transformed the American turkey into an idea of abundance.