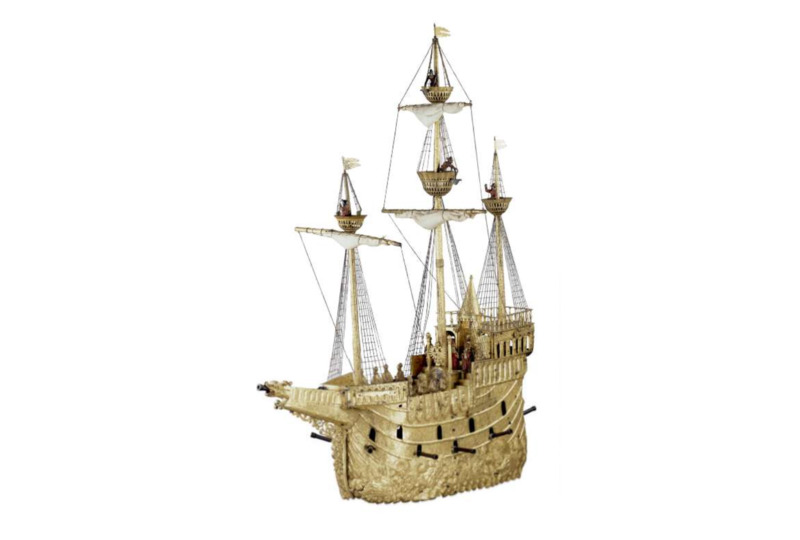 This late 16th century German automaton mimics in miniature a masted galleon that would have sailed across the Atlantic to the New World. Designed to carry troops and guns, the actual galleon was specifically manufactured for a European navy with seafaring in mind and by proxy, the mechanical galleon, a gilded ship which set sail across the dining table of the Holy Roman Emperor Rudolf II, represented the beginnings of Imperialism and colonization. During the late 15th and 16th centuries, “Europe's view of the world and of its place in it was completely transformed” because of the influx of new information about people, plants, and animals coming from foreign countries (BBC).

A metaphor in motion, the galleon likened the ship to state, since the word “‘governor’ comes from the Latin for ‘helmsman’ - ‘gubernator,’ so while the royals and elites admired the galleon, they recognized their state’s power in the maritime setting as well as the technological prowess of producing an instrument that served as a clock, an automaton, and a music player (BBC). The materials for the galleon, brass and steel, as well as the intricacy of its construction illustrates the Hapsburg’s increased wealth from the silver trade in the Americas. This interest in the mechanical extended to other automata during the late 16th century, and princely collectors kept them in kunstkammen or art chambers with limited access (Keating 14). The extreme interest in an object in motion reflected contemporary European interests in animating the inanimate and controlling the inhuman.