Politics from Classical Antiquity to the Early Modern Period 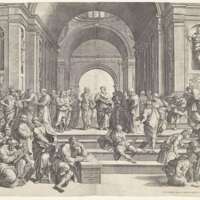 This exhibit examines the political developments of Early Modern Europe and their roots in the philosophy of Classical Antiquity (Ancient Greece and Rome), highlighting the preservation and reconceptualization of ideals that occurred between the periods. The exhibit is intended to provide the reader with a grasp of Early Modern European political philosophy/politics and its foundations. Through this, an understanding of the deeply interconnected nature of intellectual history will be fostered.